Founded in 1976, Leadership Nashville has earned the reputation as one of the oldest and most respected independent, executive leadership programs in the nation. To be among those selected to join has long been considered a top honor for a CEO.

We are a volunteer-driven organization that is governed by a foundation Board of Trustees. Our annual program is planned and executed by alumni volunteer committees focused on seven key topics bookended by two retreats. Our Alumni Association board, made up of representatives from each class, plans several programs per year for ongoing alumni access to community insights.

Our notable alumni represent many of the top businesses within Davidson County. From CEOs of hospitals and nonprofits to lead pastors, attorneys and entertainment industry leaders, every class reflects the diversity of our city in both the public and private sectors. Our participants also include people from every gender, race, sexual orientation, religion, political persuasion and socioeconomic status. Our goal is to truly foster community and create a safe space for people with different backgrounds and perspectives to gain new insights and grow together through this shared experience.

Leadership Nashville came about as a convergence of ideas. In January 1976, Nelson C. Andrews and other business leaders were discussing the need to broaden the perspectives of Nashville’s primary leaders. The business community, led by a group of 15-20 white businessmen who could get things done, began to realize that it was too insulated. To their credit, they recognized they had to get decision-makers from all parts of Davidson County together and give them a three-dimensional look at the city so better decisions could be made across Nashville.

Nelson reached out to Brent Poulton, PhD, who had recently joined the University of Tennessee Nashville faculty to develop community programs. They reviewed about a dozen programs, all affiliated with a chamber or university and included a training component. Nelson wanted an independent program of decision-makers who were a cross-section of ages and the community itself, so Leadership Nashville began as something unique that has since been duplicated in markets across the U.S. and beyond.

Nelson had the vision and Brent “could take on any project and get it beyond organized” according to Nelson, but they did not do it alone. Nelson served as the Steering Committee Chairman and Brent served as the first Program Chairman, supported by key leaders including:

The founding board of trustees included:

The first ever Leadership Nashville class was announced on September 17, 1976. 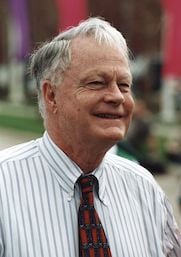 Nelson C. Andrews is widely regarded as one of Nashville’s greatest philanthropists, humanitarians and civic leaders. Known for taking a firm stance on issues he believed in, many were buoyed by Nelson’s optimism and can-do attitude, no matter the challenges.

“It is rare to find a person who exerts such a profound influence on his community, on its history and maybe most importantly on its culture,” Dr. Jeffrey Balser, vice chancellor for health affairs at VUMC, said. “Nelson Andrews is everything a leader should be; just, kind, wise, civil, full of good will and good humor. There may be no one more responsible for the greatness of this city than Nelson Andrews.

Andrews went to various public schools around the country before his family settled in Nashville. He graduated from Montgomery Bell Academy before enrolling at Vanderbilt, where he earned his bachelor’s degree in business administration and economics. Andrews he worked his way through college at a series of jobs that included playing guitar and banjo in a band called the Tennessee Dew Drops.

He went on to found and serve as chairman of Brookside Properties. He also was the founding president and chairman of Vanderbilt Children’s Hospital, Leadership Nashville, the Better Business Bureau of Nashville/Middle Tennessee, the Davidson County group of the Tennessee Health Care Network and the Girl Scouts Men’s Advisory Board. He was a past chairman of the Tennessee State Board of Education, the Nashville Area Chamber of Commerce, the Nashville–Davidson County Red Cross and the Governor’s Commission on Higher Education.

He was a former board member of United Way, Junior League of Nashville, the Nashville Institute for the Arts, Nashville’s Action Agenda, Country Music Foundation, the YMCA of Nashville and Middle Tennessee and the Frist Center for the Visual Arts. He also chaired the Tennessee Tax Structure Study Commission.

Andrews passed away in 2009 of leukemia at the age of 82 and is survived by his wife, Sue, whom he met at Vanderbilt, children Susan, Nelson Carter, Judith, Adam, and Frank, and 21 grandchildren.